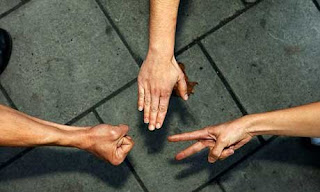 When my boys were little, they couldn't wait for their father to let them push the mower across the grass. It made noise. It looked dangerous...and to some extent was...and it was MANLY. They watched their dad do the yard work and somehow got it into their little heads that it would a neato-keeno thing to do. Of course all that changed when they got old enough to have to do the yard for real.

By then we were living in Milton, Florida and our yard was more sand than grass so it wasn't a bit deal. It was the edging that was the problem and they hated that with a passion. High school boys...unless they are making money from it...aren't too keen on pushing a loud, noisy machine up and down the yard and on the diagonal every other week. Their main objective was borrowing the car. It made noise. It WAS dangerous and sitting behind the wheel with music blaring wasn't neato-keeno but cool.

When we moved to Iowa, our sons had graduated from high school. Pete, our oldest, had just come back from Desert Storm and stayed behind in Florida. Mike came to the Heartland with us. He was in transition between young man into young adult. After we moved into our new house, he was starting to get antsy; wanted to go forth and slay the dragons, himself, and promptly enlisted in the Navy to see the world.

Which returned the mowing to Buddha Belly.

Our yard is nearly an acre and it now required a riding mower...or so Tom insisted. Varoom-varoom, more POWER!!! So he bought a Cub Cadet and looked very rural tooling up and down the yard and on the diagonal every other week. He suffered through edging and using the push mower to get around the nine black walnut trees, three apple, one pear, one plum, one crab apple, one wild cherry, numerous maples, and the assorted lilac bush and forsythia.

For seventeen years, Tommy mowed the yard himself. He shoveled snow and chopped away at the occasional ice on the driveway and sidewalk. He edged with a nasty scowl on his face and in the Fall took great delight in mulching the leaves with the Cadet. He lovingly cared for that bright yellow piece of noisy machinery while secretly wishing he could buy a John Deere with a snowblade.

Now that he's gone, the yard work has been passed on to Pete, Mike, and Pete's son, Preston. It's a three-man tag team match out there and I sit on the porch hiding behind my hand as I try not to laugh out loud at their banter as they trudge into what had been their Dad's domain.

"I've got dibs on the riding mower!" Preston announced since Grandpa had taught him three summers before to tool up and down the yard and on the diagonal every other week he was here visiting us from Colorado where he lived with his mom.

"Fine," Pete agreed with a grimace. He isn't an outdoor person. He's a white collar worker, a computer geek, an IT for a government agency that goes after deadbeat dads. "I'll do the edging."

"Guess that leaves me to push Loud Bertha," Mike complained. At 6'2" he's the tallest and the lankiest and shaves his head for whatever reason. He, too, is a computer geek who speaks a language with his brother and nephew that I can't possibly understand.

The first couple of times the boys went doggedly about their self-assigned tasks until Pete and Mike began eyeing the riding mower with lust. It tooled along noisily and finished its job before the edging and push mowing had been done.

"I'm taking the Cadet this time," Pete stated with the assurance of being the MANOFTHEHOUSE now that his dad was no longer there to fill that coveted position.

"Unh, unh," Mike disagreed with an emphatic shake of the head. "It's my turn. Age before beauty only works for girls."

Girls? I silently mouthed as I listened to them begin to argue the GREAT DEBATE.

As I sat in the swing and they carried on their childish argument, I nearly choked when the way they decided to handle it was with Rock, Paper, and Scissors...the tried and true decision maker of men all over the world.

"Rock, paper, scissors!" they said in unison, their arms bouncing to the chant.

I had to slap both hands over my mouth so they wouldn't hear my laughter.

It's been that way ever since but now they are playing the Big Bang Theory's ROCK-PAPER-SCISSORS-SPOCK! I've learned to control my laughter and I can't help but think Tom is sitting there in the swing with me chuckling silently, his merry gray eyes twinkling at the absurdity of it all.

This last week, they abandoned the game and went back to Preston on the riding mower...chugging along at an unbelievable speed, Pete with the weed eater swinging from his shoulder...taking out flowers with the weeds and grass, and Mike pushing Loud Bertha around the yard...mumbling about how LB is an electric mower and requires two hundred feet of bright orange cord dragging up and down the yard.

But never on the diagonal every other week.

Posted by Charlee Compo at 7:50 AM